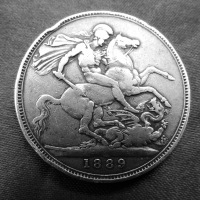 I obtained my qualification in social work (CQSW) in 1974 and worked as a Probation Officer in various roles in the South Yorkshire Probation Service for 18 years. I left Probation because I was unhappy about the role change (more on this below). I then spent twenty years in social work education, latterly preparing social workers to work with students, until I retired in 2012. I often found that social workers and students seemed unaware of the social work origins of Probation.

A crown was a British coin with a face value of five shillings (25 pence),

and I chose Crown coin because …

.. that is the exact sum that a Hertfordshire printer, Frederick Rainer, donated in 1876 towards a fund for practical rescue work in London’s Police Courts. Offenders would be released on condition that they kept in touch with and accepted guidance from what were originally called Police Court Missionaries. (In the USA, John Augustus, a Boston bootmaker had taken a similar initiative in the 1840s.)

The development and success of this approach led to the 1907 Probation of Offenders Act that formally established the Probation Service with a duty to ‘advise assist and befriend’ the offenders referred to them. The 1930s to 1960s saw an increasing trend towards professional casework, and after the introduction of the Certificate of Qualification in Social Work, this became the entry requirement for new Probation Officers.

The 1990s, however, saw a dramatic shift away from a social work-based approach, exemplified in the February 1993 quotations from the Conservative Prime Minister, John Major: “Society needs to condemn a little more and understand a little less,” and the future Labour Prime Minister, Tony Blair: “Tough on crime and tough on the causes of crime”. Subsequently a social work qualification ceased to be the entry requirement.

I’ll leave the reader to reflect on the impact of these developments, but I am proud of the achievements of social work-trained Probation Officers in mitigating the social, emotional and financial costs of crime and imprisonment.