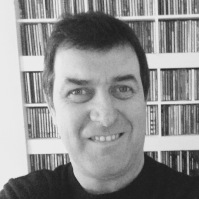 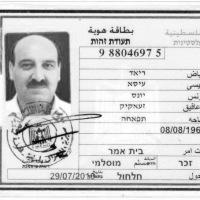 I’m not sure I had ever heard of social work before I went to University, then met a charismatic socialist social work masters student in my first term – we played football in the college team together – and my first impressions were exciting ones. Despite all the social-work-related trials and tribulations experienced in the 35 years since then, my impressions remain fundamentally the same. I was excited enough about social work in early 2014 to apply to be the chair of the British Association of Social Workers and it is a post I am thoroughly enjoying. I have, however, retired from playing football.

I chose Riad’s ID card because …

… in November 2013, at a conference of the Palestine-UK Social Work Network in London, the Palestinian Ambassador to the UK startled the network’s organisers by announcing during his opening address that the following year’s conference should take place – in Jerusalem! The President of the Jerusalem branch of the Palestinian Union of Social Workers and Psychologists (PUSWP) pledged that they would organise this, even though he knew that most Palestinian social workers would not be able to attend. He had previously explained the symbolic importance of PUSWP’s head office being in Jerusalem, as the capital city of Palestine, even though most of PUSWP’s members would be prevented from visiting it and membership of PUSWP is actually illegal in Jerusalem according to Israeli law. To have the conference in Jerusalem was of equal significance.

A year later the conference took place, over two days, the first in Jerusalem and the second in Bethlehem. Riad Arar, the President of the Hebron branch of PUSWP and one of the main organisers of the conference, was not present on the first day. Riad has not been allowed by the Israeli government to enter Jerusalem, 19 miles from his home in Hebron, since 1998. There are about 500 Israeli army checkpoints in the West Bank and Jerusalem, and Riad can be stopped and asked to show his ID card at any of them. One of the most difficult aspects for Riad is the apparent arbitrariness of the soldiers’ decisions on restricting his freedom of movement. I have been through a checkpoint with him in Hebron, to visit Qurtuba primary school, when he was allowed through, but when taking other international delegations to visit this school situated in the heart of an illegal Israeli settlement, Riad has been refused entry.

I have run training courses in Palestine, and the social workers who attended arrived at various times during the morning depending on how many checkpoints they had had to cross. I try to imagine what the day-in-day-out experience of this would be like as a social worker here in the UK, not knowing what time you might arrive for a course, at a meeting, at a service user’s home, or even whether you could get there at all, but it’s not easy.

Principles of social justice, human rights and collective responsibility are central to social work, according to its international definition. Who should take responsibility for the denial of the human right of freedom of movement for Riad Arar and our other Palestinian social work colleagues?

One thought on “Riad’s ID card”